Do you want to give your mealworms an alternative type of substrate? There are many options available that can be used instead of traditional bedding that most people don’t know about.

There are actually quite a few reasons why you would want to use an alternative to the usual grain-based substrates. It could be an environmental reason, an allergy reason, Or just simply trying something new. Either way, here are several alternatives to mealworm substrate that most people don’t think about, but do work!

Vermiculite is a type of mineral that expands when it’s heated. It can be used as an alternative to bedding like cornmeal, wheat bran or rice hulls because it provides plenty of oxygen for the worms and doesn’t compact as quickly. A decent bonus is that vermiculite does not hold moisture well and you may deal with fewer mold issues than with traditional oat-based culture.

A long-time forum user named Tim and Julie B swears by it and has successfully used this substrate for their mealworms. They’ve also had great success in breeding in it.

Much like some of these alternative substrates, you will read about in this article though, vermiculite is inedible. Most normal mealworm substrates are edible which makes feeding simpler. In this case, as noted by Tim and Julie, you will need to give them occasional dry cereal and lettuce leaves. 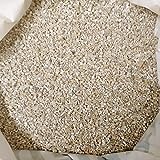 Sawdust is a very cheap alternative to traditional mealworm substrate. Be careful about the type of wood you use as some types may have toxic chemicals that could be harmful to your worms and cause illness or death. It’s much less of a worry if you buy it from a pet store. You can also check out the one we chose for this article on amazon right here:

You want sawdust that is somewhat fine, but not overly so. Avoid larger chip cuts and sawdust that might be sharp or pointed. Mealworms are delicate and you don’t want to puncture their skin.

Overall you shouldn’t have any problems with your mealworms in this substrate. However, if after a while you notice that they are not as active or seem to be eating less then it could be because the sawdust is too wet, or too fine/rough. It should be easy to tell which it is. If it’s too wet, then you should add a little more sawdust. If it’s too rough or sharp then mix in some vermiculite or change out to finer sawdust completely.

Warning: Many kinds of wood will contain phenols that may be toxic to reptiles.

Beta Chip is a name-brand bedding specifically for smaller rodents. It’s becoming more and more popular in mealworm habitats because of its smooth, dust-free nature.

It contains various chips of Virgin wood fiber from debarked maples, beech, birch, poplar. It has an extremely low moisture content, it can even be re-sanitized inside an autoclave.

We have not personally had a chance to try this out, But after doing a bit more research and talking to some other friends in the field, we decided we are going to give it a shot as well!

Coconut substrate has been a popular one for many different animals, reptiles, and insects. Apparently, according to Hisserdude of the arachnoboards, it also makes a fine substrate for your mealworms.

The caveat, much like other none edible substrates, food and water will need to be provided from an outside source. Hisserdude tells us that he put grains in a larger juice bottle cap and add fruits and vegetables straight into the substrate.

Maintenance seems a bit higher with this substrate, however, and you will need to remove uneaten foods from the enclosure. This will help keep moisture levels down and prevent mites from taking hold.

We didn’t know about this one at all until recently. It kind of makes us sad that we didn’t think of using dried breadcrumbs as a substrate for mealworms.

It’s not the most nutritious of all possible substrates aside from grain, but it has been suggested as an alternative to those who have reptiles that are allergic to wheat products. Because you know, feeding a mealworm full of oats to a lizard who is allergic to oats doesn’t usually end well!

The best part about this substrate is that it can also act as a food source in itself just like a normal honey oat mixture would. You could also add honey to the bread crumbs just like you would to oats. That means the mealworms are more likely to breed in this substrate than they would for say, sawdust.

A bonus for using this is you can make it at home. Although, it’s probably not as easy as just buying it. Just make sure theirs no spices are extra ingredients like that in the bread your using, or the crumbs you buy if you decided not to make it yourself!

You will still need to add extra nutrients and wet food(s) with this substrate, however. It may also mold faster if you aren’t careful about the moisture levels. All in all, though, we think it’s a good solid alternative.

The bottom line, there are a lot of different alternatives to mealworm substrates. Some are better than others, but they all have their uses. Keep in mind, mealworms won’t breed in all of these, but they will in some of them.